After World War II, most of the schools in Kansas were small and operated independently of each other. In most communities, the elementary school and high school each had their own separate three-member board. Unified School Districts wouldn’t come about until the 60’s.

Schools were small enough that they didn’t need specialized people to take care of the everyday needs of the building. They usually had a staff of one, which consisted of a janitor. He was the person who unlocked the doors in the morning, made sure the heat was on, and took care of the building in general.

When you saw him walking around the school in his blue-and-white striped Oshkosh bib overalls, he probably had a rag hanging out of his back pocket that he used to clean off the tops of the student’s desks. There was the subtle smell of red floor sweeping compound while he pushed a broom over the oak floors.

“The men that were entering the field to take care of these new buildings needed a place to look for training and solutions to their problems.”

In the early ’50’s, maintenance personnel from five larger school systems, Manhattan, Lawrence, Ottawa, El Dorado, and Topeka had more difficult problems. They met to work out solutions and share ideas; but after a few years, these meetings ceased to exist.

During the 1950s with a rapid growth in many communities, many new school buildings were built. The men that were entering the field to take care of these new buildings needed a place to look for training and solutions to their problems.

The only state wide thread among schools was the Annual Custodial Workshops sponsored by the State Vocational Department, led by John Truax of Kansas State Teachers College in Emporia. During the custodial trade school of 1956, a poll was taken and it was agreed to form an organization.

An organizational committee was appointed to develop a constitution. The committee consisted of Ed McNeill from Topeka, Dick Johnson from Lawrence and Dale Skelton from Manhattan.

On March 19, 1957, an organizational meeting of the Kansas Association of Directors of Plant facilities met at Kansas State Teachers College in Emporia. John Truax called the meeting to order with 15 members present. The Constitution and by-laws were adopted and Dale Skelton from Manhattan was elected the first president. It was decided that the first annual meeting would be held October 15 and 16, 1957 at the student union building on the campus of Kansas State Teachers College in Emporia. 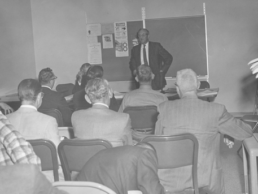 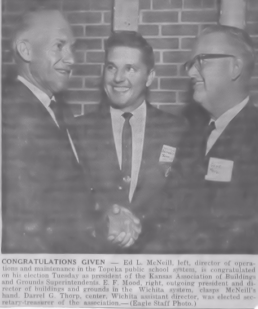 From 1963 to 1972, KADPF held their meetings in various locations across the state. Those were Emporia, Salina, Topeka, El Dorado, Garden City, Wichita and Hutchison.

In 1969, John Truax, one of the founding fathers of KADPF, announced his retirement. Larry Smull with the Salina Area Vo-tech School took John’s place as director of the Annual Custodial Workshops. Larry Smull would continue to serve on the board as an ex-officio board member for the next 25 years.

It was agreed that the KADPF would merge with KASBO keeping the present officers intact until the KASBO meeting in April, 1975. At that time, it would be decided whether KASBO was meeting the needs of KADPF or whether they should go separate ways. In April, 1975, the executive board met and it was the majority opinion to continue with KASBO at that time.

By 1979, it was determined that the plant facilities members in KASBO were dropping off significantly. In November, 1979, a board meeting was called to discuss the future of KADPF. Art Post, the board representative at KASBO, was asked to preside over the meeting until a president could be elected. It was expressed very strongly that the reorganization of KADPF would be beneficial for the school maintenance personnel.

Art Post from Manhattan was elected president and it was decided that they would meet in September, 1980 in Salina.

A letter was sent to KASBO asking for the return of approximately 50% of the $1,031.61 given to the KASBO treasury when the two groups merged. In April, KASBO denied the request.

“It was expressed very strongly that the reorganization of KADPF would be beneficial for the school maintenance personnel.”

In June, 1981, KASBO sent a letter stating they had allocated $200 for expenses for the KADPF fall meeting. In January 1982, KASBO returned an additional $300 to make up the additional portion of the requested funds.

1982 turned out to be a bad year for officers in KADPF. In February, the Association’s president, Evert Tyson sent a letter of resignation stating health reasons. A few days after the letter was sent, Mr. Tyson passed away. Later that year in April, Robert Winter, the vice president, sent a letter of resignation stating that he had had a stroke and would need to resign his post because of health reasons.

Dave Williams, a prominent salesman for Pur-O-Zone in Lawrence, had dreamed for years about starting a scholarship fund for children of custodial workers. In the early 90s, Mr. Williams passed away before he could figure out a way to develop the fund.

They both agreed that since both men spent a lot of time and energy trying to help the frontline custodial worker, they would try to muster some money for the scholarship fund that Dave Williams had envisioned with the provision that it be restricted to legal dependents of custodial workers.

“Dave Williams… had dreamed for years about starting a scholarship fund for children of custodial workers.”

Knowing that they didn’t have the time or the resources to administer a scholarship, they went to the Kansas Association of Directors of Plant facilities and ask the association to manage the scholarship fund. Both companies offered a donation of $500 each to start the fund. Also, the Shanks family of Kansas City added a memorial fund set up in memory of Herbert Shanks Sr. to the scholarship fund.

KADPF gladly accepted the responsibility for managing the scholarship and applied for tax-exempt status so that all contributions to the fund would be tax deductible. At the end of 1993, the Association scholarship fund had initial assets of $2,913.

In 1994, information and applications went to every Kansas high school and 29 students applied for the $500 prize. The first recipient of the Kansas Association of Directors of Plant Facilities Scholarship was Martin Nash II, a graduate of Minneapolis high school. Martin attended Kansas State University, majored in chemistry and went on to study medicine.

Through hard work and diligence over the past 20 years, the Association now has a scholarship fund with a total equity of over $110,000. This year, it will award four $1,000 scholarships to qualifying students.

Since its inception in 1957, the mission of the Kansas Association of Directors of Plant Facilities has evolved to promote and maintain personal improvement by providing educational programs to increase the knowledge of methods, materials, and equipment for the operation and the maintenance of buildings and grounds, raise the standards of building maintenance; to cooperate with superintendents of schools, elected or appointed officials, and other officers and organizations, to hold regular meetings of the Association, and for fellowship.